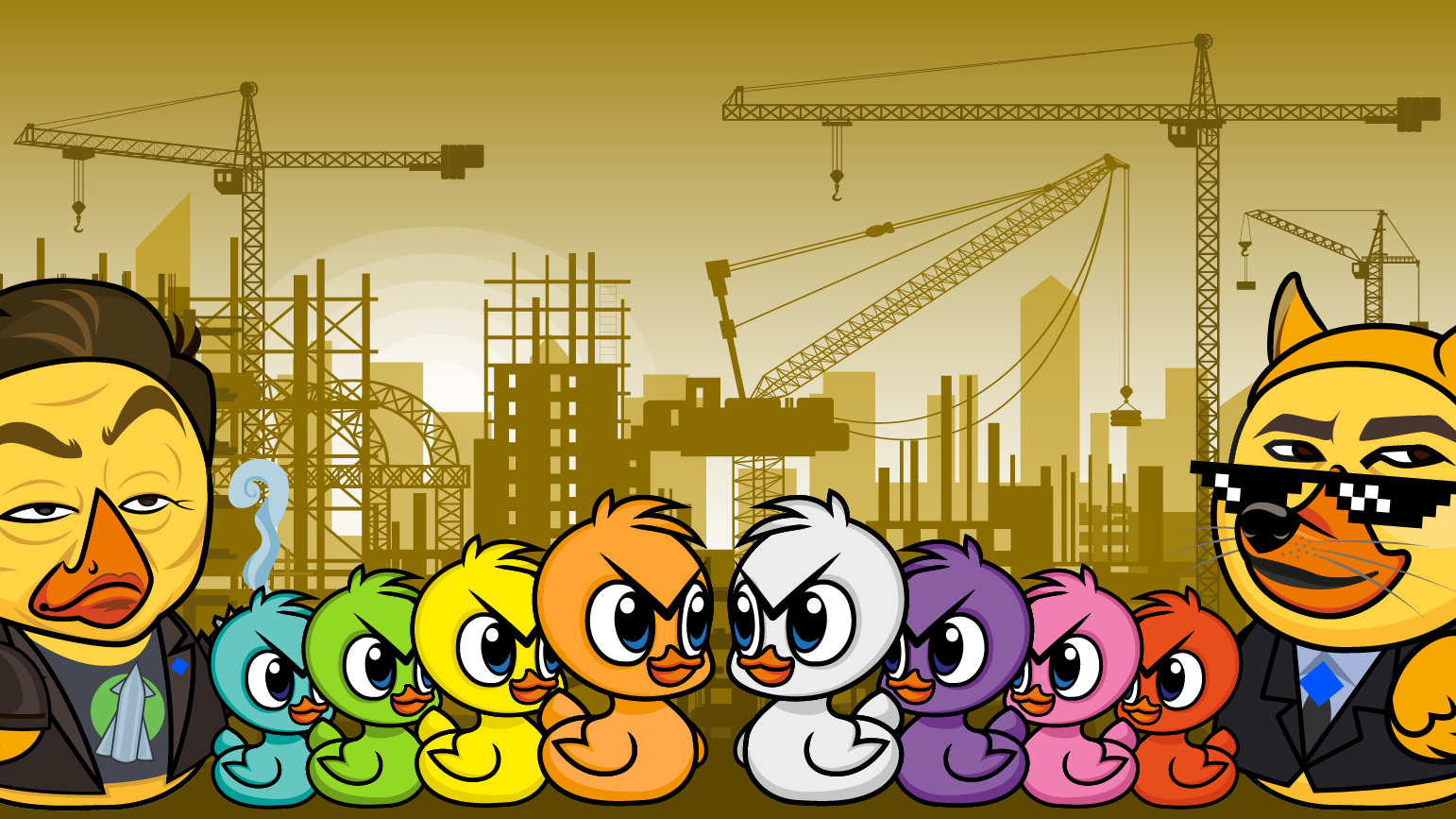 The first WavesDucks-Turn-Based-MMORPG:
a new exciting crypto/defi/play-to-earn game
secured by the Waves blockchain!

A never-before-seen game play, consisting of a turn-based game mode and an incentive mechanism that encourages game token spending and constant play

Meant to be accessible and fair by various users. It will be possible to participate in the game both with and without wavesducks and there will be a free to play mode

Only 10,000,000 tokens will be issued. The finite number of tokens is a key element in generating a healthy and deflationary gaming economy

Are you ready to play?

QUACK! Have you heard?

The Ducklization adventure started on June 30th!
What’s it about? Let’s try to understand it step by step

Read the full guide to join the game 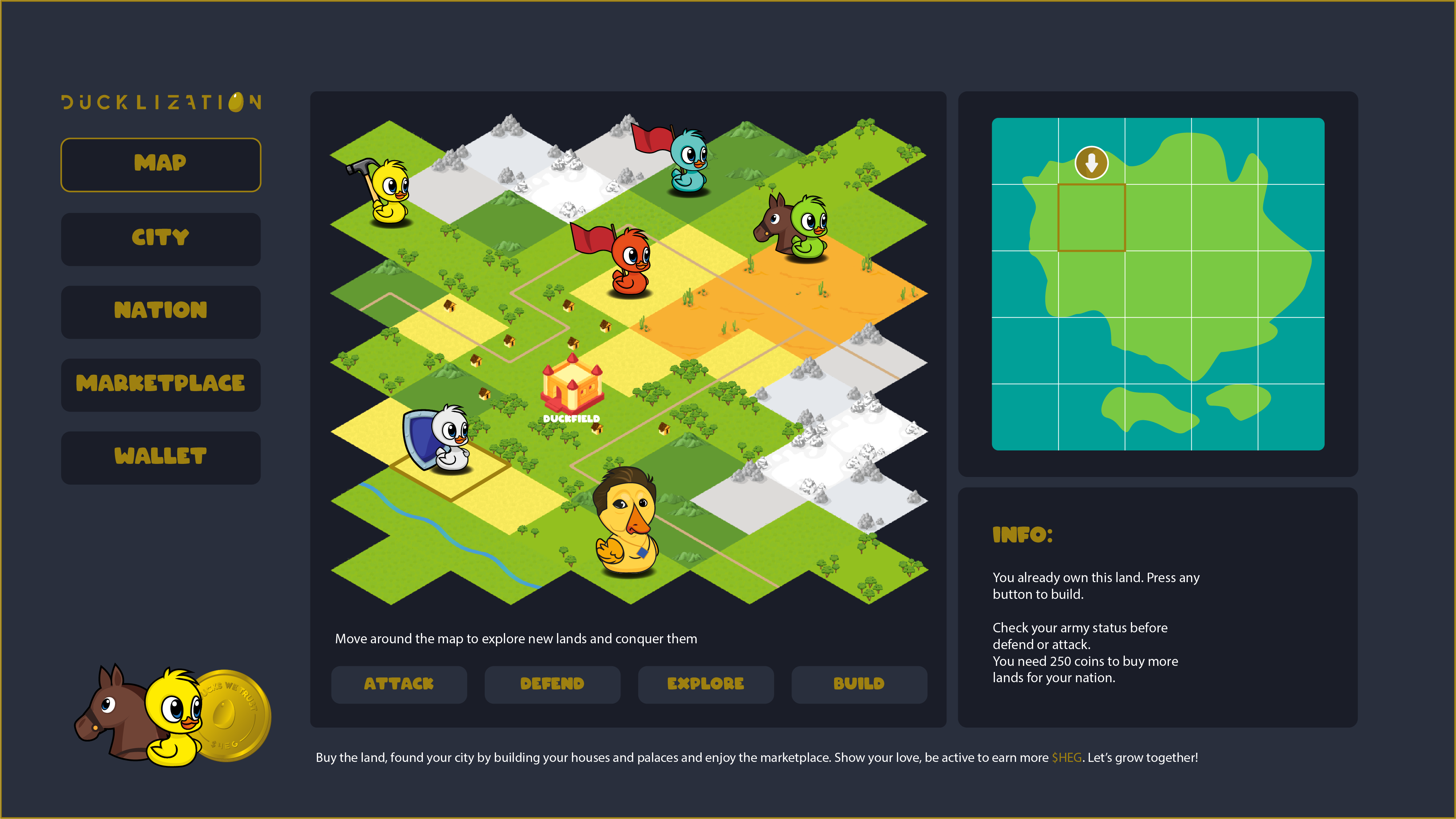 Use the Waves Ducks to search and found a Nation, but also to explore and fight, as well as defend strategic positions!

And that’s not all, it will be possible to play even without owning a Waves Ducks. In any case you’ll be able to manage troops and found cities that will then have to be administered.

The city is the productive center of the game.

From here you can raise buildings and units, as well as take decisions on the administrative choices of the city. Cities also contribute to the production of SHEG, the token of the game. 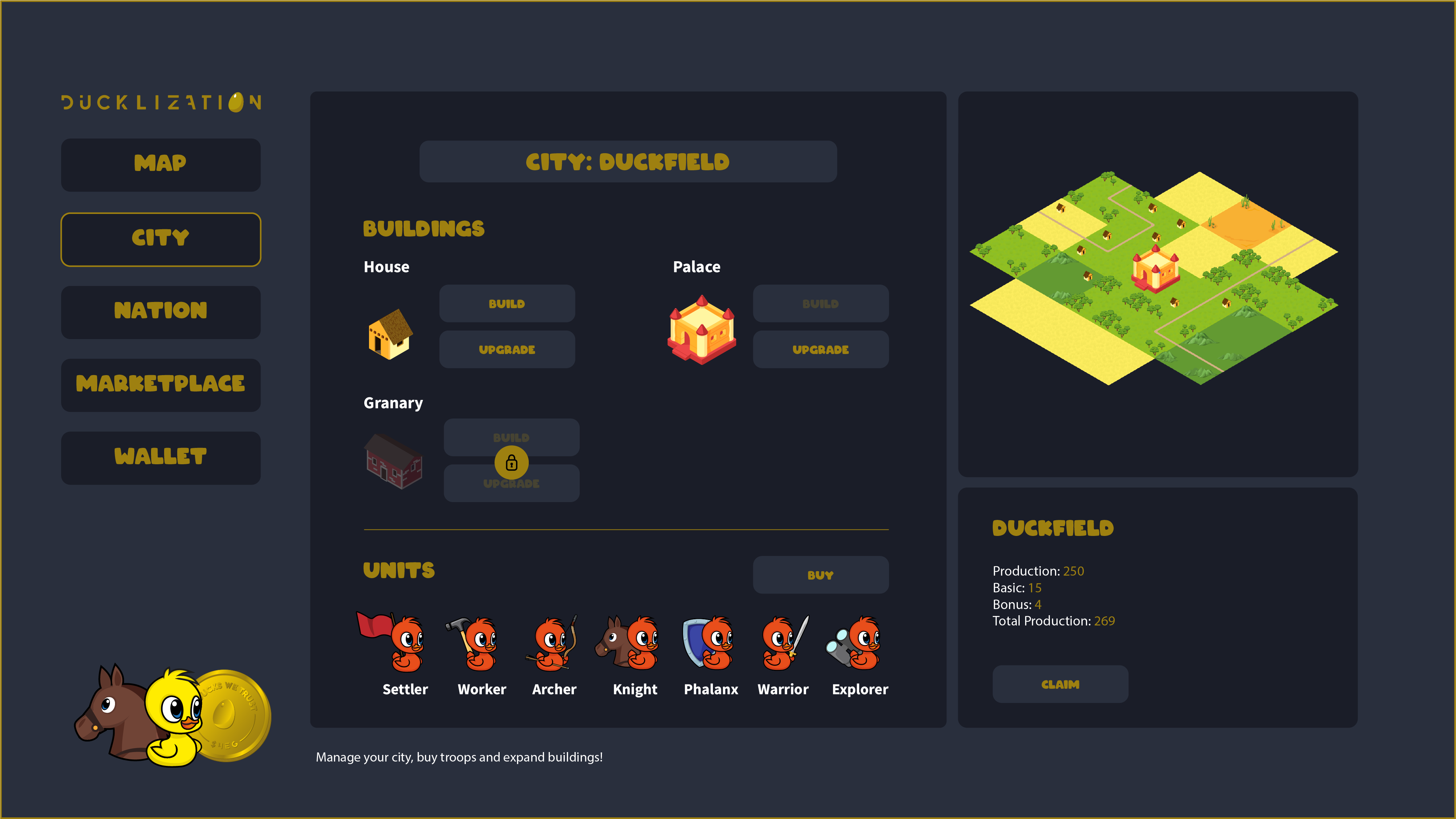 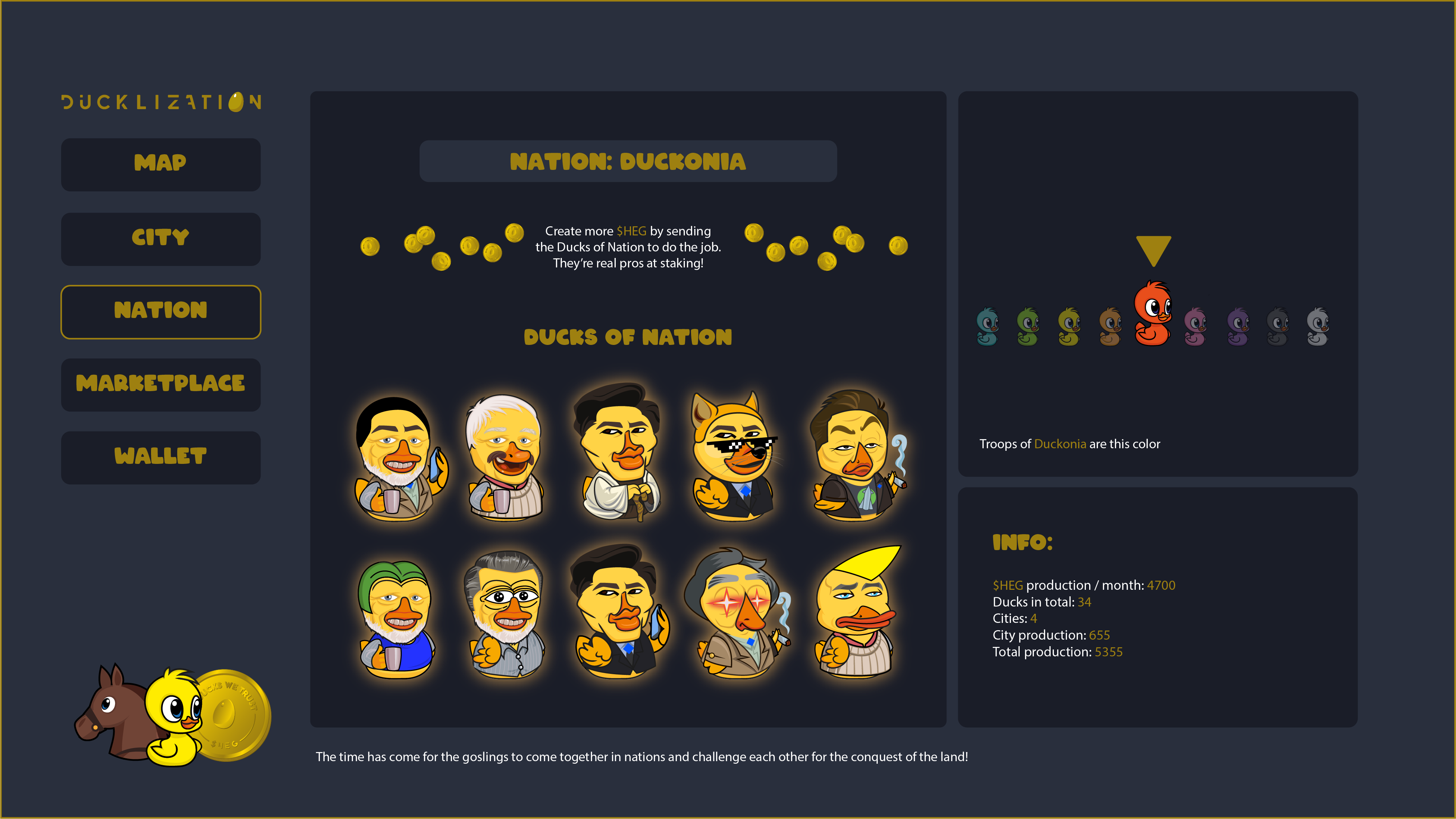 Found or join a Nation, you will be able to participate in the production of Shiny Eggs, the currency of the game, through a staking mechanism.

You will receive rewards and be able to assert your opinion on the strategic and diplomatic decisions of the Nation.

The marketplace is where you make deals, you can sell or buy units and special items with all the appropriate tools to compare and filter the different offers on the market. 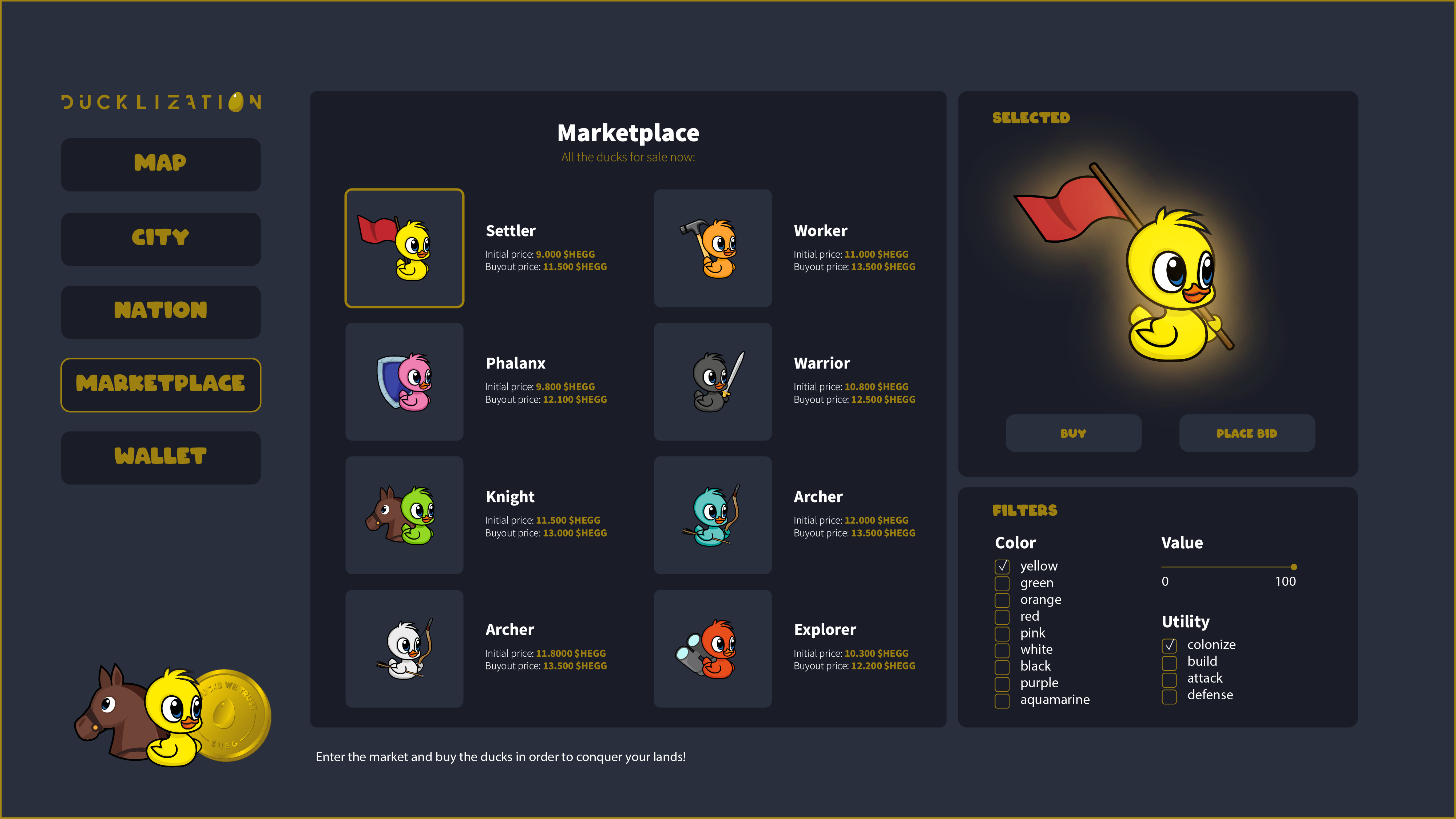 The supply, division and distribution of the token have been designed to create a strong economy and keep the game as fair and decentralized as possible. Only 10 000 000 tokens have been issued and no more will be issued (Hard Cap) in order to create a deflationary economy within the game.

Most of the tokens will be locked into the smart contract and used to guarantee game (20%) and staking (65%) rewards.
5% will be used for promotions, airdrops and giveaways which will be distributed gradually and evenly over the first 2 years of the game.
Another 5% will be sold in pre-sale and only released at the start of the game with a 6 month vesting while the last 5% is left to the team.

The token has a great use case: as any purchase within the game is made in SHEG, it exponentially boosts the purchase pressure as the number of players and the complexity of the map increase.
Furthermore, each building and troop binds to itself a part of the tokens spent in the production cost which can be conquered by the opponents in case of destruction of the unit or the building. This mechanism encourages the triggering of fights and keeps the need to play, attacking, building and producing continuously, to avoid being overwhelmed.

All of these elements are the key to make the token thrive and give the game a long life!

We are launching $SHEG, the game token, do not miss this extraordinary opportunity to enter this unique project early!

A small part of the tokens was allocated in the pre-sale (less than 5%) at the fixed price of 1$.
Tokens bought in pre-sale have a vesting of 6 months from the start of the game.

The presale is over but don’t worry, $SHEG is now available on Puzzleswap.org!

THIS IS A DUCK GAMES SOCIETY PROJECT!

D.G.S. is a conspiracy of
“EGGSAGGERATED EGGS FARM”,
a collective farm of Waves Ducks

Thanks to Waves Ducks and Waves blockchain